Just as freckles, moles, and birthmarks can occur on your skin, a nevus (the medical term for a birthmark) can also be found inside your eye.  They are most often seen in the pigmented layer beneath the retina called the choroid. 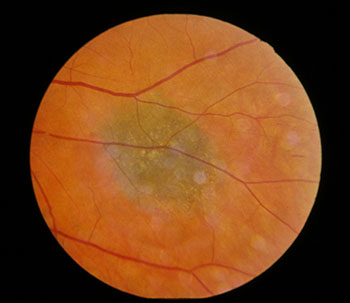 What is a Choroidal Nevus?

Nevus is the medical term for a birthmark. Just as freckles, moles, and birthmarks can occur on your skin, a nevus can also be found inside your eye.  They are found in the pigmented layer beneath the retina called the choroid.  About 6% of Americans have a choroidal nevus. A choroidal nevus can only be seen by an eye care specialist using specialized tools to see inside your eye.

Is a Choroidal Nevus Dangerous?

Most choroidal nevi remain benign and cause no problems. Just like freckles and moles on your skin, a choroidal nevus can rarely grow into a malignant melanoma. About one in five thousand nevi grows into a melanoma.

Should I Have My Nevus Treated?

Most choroidal nevi do not require treatment.  Some choroidal nevi have features that make them a higher risk for growing into a melanoma. These nevi should be watched carefully.

How Often Should I Get Re-Examined to Know if My Nevus is Changing or Growing?

All choroidal nevi should be examined at least once a year. If your doctor notices certain features on your nevus, you may need to be checked more often. For example, if the nevus is particularly large or thick, has orange pigment, or is leaking fluid, then it is more likely to grow into a melanoma.  Dr. Comaratta will decide how often to recheck your nevus to decide if it has grown into a melanoma.

What Needs to be Done to Check My Nevus?

All choroidal nevi require careful examination and documentation by an eye doctor. Some nevi require additional testing. This may include the use of an ultrasound of the eye, specialized photography, or an angiogram of the inside of the eye. These tests are useful to carefully document the size, shape, and characteristics of your nevus to determine if it has changed or is staying the same on future examinations.

Does a Choroidal Nevus Affect My Vision?

Almost always, a nevus causes no visual symptoms. Rarely, a nevus can cause a blind spot in the vision of one eye, but this rarely affects a patient’s day to day vision. Sometimes, visual changes are a sign of other problems or that a nevus has begun to change into a malignant choroidal melanoma. Any visual changes should prompt a careful examination by the doctor.

Pay your bill and check your appointments